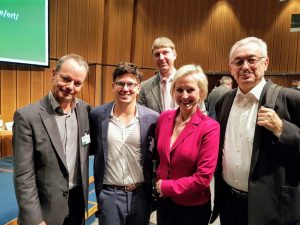 Berlin, 22 January 2019 Showing the connections between technical concepts such as circular economy and real-life emotions of young people, such as love for nature, is crucial, just as the use of modern and sophisticated marketing techniques. People should fight for recycled products, considering them precious, instead of feeling forced or manipulated to buy them because of “the environment”. WRF Managing Director and Club of Rome member Bas de Leeuw gave this main take-away message to the European Resources Forum, held in Berlin on 28 November last year. The workshop report about “Circular Economy – the Consumer Perspective” was published today by the WRF Secretariat.

The Berlin Forum also listened to WRF partners, including Lieze Cloots from OVAM, the public waste agency of Flanders (OVAM), Vanessa Timmer from One Earth, Markus Terho from the Finnish Innovation Fund SITRA and Rolf Buschmann from Friends of the Earth, Germany. They gave theoretical background information and insights on practical examples of the consumer perspective on circular economy and addressed key challenges that consumers are facing on their way to a circular economy. 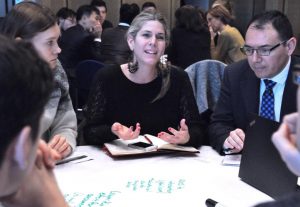 Lieze Cloots stated that government bodies, UN-bodies and non-governmental organizations could work towards a circular economy, respectively circular procurement, by using less materials, purchasing fewer virgin materials and by expanding the lifetime of the materials already in use. Through circular procurement policies, institutions can create demand for sustainable products. Institutions can also maximize reusability and recycling rate of materials, which leads to the reduction of virgin material inputs. She observed that often the knowledge and insights on circular economy are missing and that time and financial resources of institutions often do not allow for an in-depth discussion of the topic within the institution. According to her, awareness and support for the issue from the management side is crucial. Lieze Cloots presented several measures that have proved helpful in working towards a circular economy in Flemish institutions through a project called “Green Deal Circular Purchasing”. Amongst them, she mentioned learning networks for management members of the participating companies and financial support from the government to subsidies efforts towards circular economy. She also stressed the importance of collaboration and exchange of experiences between European countries. In particular, the best and the worst experiences of each institution should be shared. 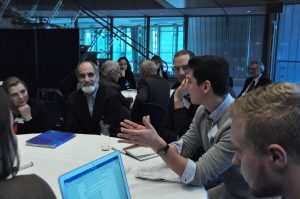 According to Vanessa Timmer the main areas of concern for sustainable daily living are food (waste), mobility, consumer goods, housing and leisure. She provided an example of a Canadian food exchange network as a possible mean to reduce food waste. She furthermore stated that the current cultural paradigm is shaped in a way that humans are mainly profit oriented and aiming at fulfilling their personal desires. The question therefore is, how to deconstruct this social discourse and shape it in a more sustainable way. In her opinion, “people should expand to living, not just consuming”. To do so, basic needs should be considered more valuable. Additionally, people should leverage on significant life moments and transitions such as marriage, birth or immigration to initiate new patterns of thinking and behaviour. She mentioned the Shark Truth Initiative, which, building on traditional Chinese values, influences catering at weddings. It uses the double happiness character to convey the possibility of “bringing together harmony for our oceans with harmony for wedding couples by making banquets fin free.”

In addition, Vanessa Timmer suggested a change in working life and mobility, i.e. a change towards higher appreciation of (social) time. Moreover, she stated that the sharing of goods within communities, for example car sharing, should receive a higher social value. Through these measures, a more sustainable way of living within planetary boundaries could be achieved, where progress is defined by wellbeing, not primarily by economic growth. She referred to the recently published UNEP global survey on “Vision for Change” which provides recommendations for effective policies on sustainable lifestyles. 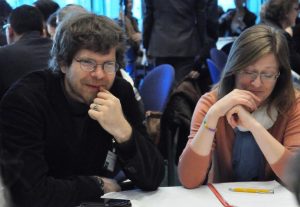 Sitra’s Markus Terho stated that people should focus on the real important things in life. Because “getting new stuff won’t bring you happiness. Spending time with your family and friends will.” He therefore stated that people should reconsider their priorities and focus on the real important things in life. To further mark his point, he gave the example of a man on his death bed. In such a situation, nobody would reflect about the flat screen television that was bought, but everybody thinks about their family members and the time spent with them. Therefore, in everyday life, everybody should reflect on what he does, why he does it and whether he or she would be willing to do something else. To make people reconsider their choices, sustainable lifestyles must become a broad social movement. In order to achieve this, Terho stressed the importance of front running consumers. He, furthermore, proposed to collaborate with large international companies and their marketing departments to make sustainability and circular economy more attractive to the public.

The major challenge for doing so was described by Rolf Buschmann, Friends of the Earth Germany, who stated that “people are selfish and the ones who react and reduce their impact first are most likely seen as losers.” The problem however is, that if nobody reacts and reduces the own environmental footprint, everybody will become a loser. He furthermore called for more sufficiency, as up to now, the decoupling of resource consumption and economic growth did not happen. He reflected on the societal role of consumers and the question of “how much is enough?”. He advocated for a reconsideration of the consumers role and called for more sufficient lifestyles within the planetary boundaries. To achieve such lifestyles, social agreements for the whole society, which define universal guidelines, are needed, Buschmann said: “Not Germany first, not America first, but World first.” 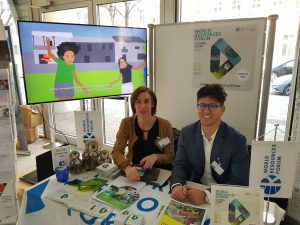 The topic of sustainable lifestyles and communication for the circular economy will be part of the upcoming World Resources Forum “Closing the Loops” in Antwerp, February 24-27, 2019.