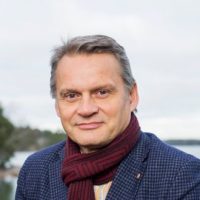 Prof. Markku Wilenius has been working passionately with futures studies for the last twenty years. He joined Finland Futures Research Centre in the middle of 1990´s as a coordinator of the first large study program on futures studies. He completed his doctoral thesis on sociology of climate change in 1997 and started to engage with various topics and clients. He studied and worked with number of topics: the implications of information society, future of mobile technology, future of food consumption, the role of culture in our economies, the use of innovation and creativity in companies, future of media, future of sustainability and so forth.

He has worked with most of the major companies in Finland including Nokia. He has also labored with a large number of governmental bodies. He has represented Finland in international negotiations, such as Johannesburg summit for sustainable development 2002. He has led Finland futures research centre for a number of years. He is the professor of futures studies in the Turku School of Business since 2004.

In 2007 he was asked to lead the strategic research and development in one of the biggest companies of the world, German based insurer Allianz. During the two year process he also learned enormously. He is still today a senior advisor of the company, which gives him the opportunity to be engaged with other organizations as well.

He is a passionate agent for change. That is why he has been engaged with The Club of Rome, world’s best known think-tank for future. Throughout the years, he has been working with other NGO´s in order to understand where the world is heading at. He has travelled all the continents and met countless of people to hear their views and stories.

He is also very much of a nature-boy; he still practices his former profession as a gardener in his own garden on an island of Helsinki archipelago. He loves to walk in the forests and sail the seas with his sailing boat. He likes to express himself in many different ways for example by playing bass in a bossa nova and jazz orchestra for the last 25 years. And last but not least, he loves to play around with his two sons, Konsta (21 years) and Teiko (18 years).

Back to the WRF 2017 Scientific Committee
William WorrellDr. Patrick Wäger