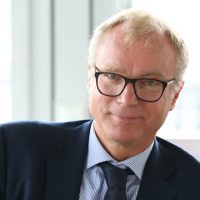 Valentin Zellweger was born in 1962 in Basel. He studied law at the universities of Basel and Neuchâtel, obtaining a PhD in public international law. In 1991 he joined the FDFA as an academic desk officer, working in the Directorate of International Law (DIL). In 1993 Mr Zellweger joined the diplomatic service, completing his internship at the Swiss Agency for Development and Cooperation (SDC) and with the Swiss representation in Nairobi. Appointed diplomatic officer in 1995, he was assigned to the DIL and in 1999 he was transferred to the Swiss mission to the United Nations in New York. From 2003 to 2007 he was head of the office of the first serving president of the new International Criminal Court in The Hague. In May 2007 Mr Zellweger returned to the DIL in Bern as assistant director. In 2010 he became director of the DIL. Since 1 August 2016 he has been the Permanent Representative of Switzerland to the United Nations Office and to the other international organisations in Geneva. Mr Zellweger is married and has two daughters.

Back to the WRF 2017 Plenary Speakers
Giulia CarboneXaver Edelmann