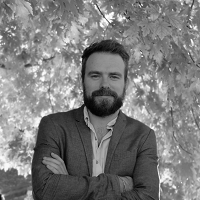 Eduard is currently a PhD student at the Institute of Earth Sciences, University of Iceland. He is part of a EU ITN project called Adaptation to a New Economic Reality (AdaptEconII). He primarily analyzes the use of resources in the food supply chain and ways to optimise the system in a way that will make efficient use of nutrients and allow for a shift to circularity. In particular, Eduard examines the potential transformative dynamics in cities, through a change in the role of urban areas from hotspots of pollution to hotspots of nutrient recovery from waste and reuse of the nutrients in the food production system.  He also analyses the systemic issue of food wastage and prevention/reduction methods along the supply chain, from harvest to consumers, in order to find leverage points in the system where intervention is most likely to bring improvement. Eduard graduated with a BSc in Geography from Coventry University, UK. He then worked as a Project Assistant and later as the Agriculture and Rural Development Coordinator at CEEweb in Budapest. In 2014, he graduated with an MSc in Environmental Sciences and Policy from the Central European University in Budapest.