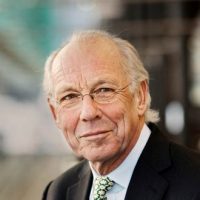 Jørgen Randers (born 1945) is professor of climate strategy at the Norwegian Business School, where he works on climate and energy issues, scenario analysis and system dynamics. He lectures widely at home and abroad on sustainable development issues – particularly on the future and climate change – for all types of corporate and non-corporate audiences.

Jørgen Randers has spent one third of his life in academia, one third in business and on third in the NGO world. He is non-executive member of several corporate boards in Norway, including the state owned Postal Service. He also sits on the sustainability council of The Dow Chemical Company in the US and Astra Zeneca in the UK.

He was President of the Norwegian Business School BI 1981 – 89, and Deputy Director General of WWF International (World Wide Fund for Nature) in Switzerland 1994 – 99. He chaired the Commission on Low Greenhouse Gas Emissions who reported in 2006 to the Norwegian cabinet on how Norway can cut is climate gas emissions by two thirds by 2050.

He has received many prizes and awards, including an honorary doctorate from the Anglia Ruskin University in Cambridge UK. He is a full member of the Club of Rome.

Back to the WRF 2017 Plenary Speakers
Xaver EdelmannMarc Chardonnens