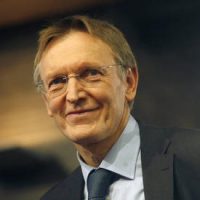 Dr. Janez Potočnik was born in 1958. He graduated with honours from the Faculty of Economics at the University of Ljubljana. He continued his studies at the same University where he did his Master’s degree in 1989 and a Ph.D. degree in 1993. For several years (1989-1993), he worked as a researcher at the Institute of Economic Research in Ljubljana. In July 1994, he was appointed Director of the Institute of Macroeconomic Analysis and Development of the Republic of Slovenia. In April 1998, the Government of the Republic of Slovenia appointed Dr. Potočnik Head of Negotiating Team for Accession of the Republic of Slovenia to the European Union. From June 2000 to December 2000, he was also the acting director of Government Office for European Affairs. In June 2001, he was appointed a Minister Councillor at the Office of the Prime Minister. On January 24, 2002, the Government of the Republic of Slovenia appointed him for the Minister without portfolio responsible for European Affairs. From 1991 until 2004 Dr. Potočnik has also been an assistant professor at the Faculty of Law at the University of Ljubljana, where he lectured on statistics and economy. Dr. Potočnik became a Member of the European Commission on May 1st, 2004. From 2004 until 2010 he was responsible for the Science and Research. In 2010 he took on a second mandate as Member of the European Commission responsible for Environment. The mandate ended November 1st, 2014. Still in 2014 he was appointed for a three-year term as a member and Co-Chair of International Resource Panel hosted by the United Nations Environment Programme. In the same month he was also appointed as a Chairman of The Forum for the Future of Agriculture and a Member of the European Policy Centre’s Advisory Council. In May 2008 he was awarded the honorary degree of Doctor of Science by London Imperial College. In March 2009 he received the honorary degree from Ghent University (Belgium). In September 2013 he received the United Nations’ 2013 Champions of the Earth Award.