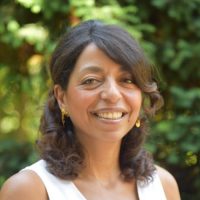 Doaa Abdel-Motaal, a dual Swiss Egyptian national, is an agriculture, environment and climate expert with over twenty years of national and  international experience.  Doaa was raised in twelve different countries and speaks Arabic, English, French, Italian and Spanish fluently.  Her career started at the Egyptian Environmental Affairs Agency (EEAA) in the early 1990s, where she was responsible for working with experts from across different fields and national institutions to coordinate Egypt’s new environmental sector strategies, and to mobilise donor funding.

Her passion for environmental issues took her to the World Trade Organization (WTO) in Geneva where she was responsible for the Negotiating Group on Environment, and the settlement of certain commercial disputes with an agricultural and environmental angle. She subsequently became Advisor to the Director-General of the organisation, Pascal Lamy, on agriculture, environment and climate change and Deputy Chief of Staff.

Doaa’s career later took her to Rome where she became Chief of Staff of the International Fund for Agricultural Development (IFAD), contributing to the organisation’s 10th replenishment cycle, the management of its staff in Rome and country offices, and the oversight of the organisation’s project life-cycle. In Rome, her career extended to another United Nations agency, the World Food Programme (WFP), where she was tasked with assessing the operations and performance of the organisation.

In 2015, Doaa took a research sabbatical, travelling to Antarctica on a National Geographic Expedition and the Canadian Arctic on an Earthwatch Institute Climate Change Expedition. She subsequently published a book entitled ‘Antarctica; the Battle for the Seventh Continent‘, which foresees a battle for the conquest and exploitation of the resources of Antarctica.

Doaa holds a PhD in Development Studies from the International Development Institute of the University of Geneva, a Master of Philosophy degree in Environment and Development Studies from the University of Cambridge, a Master of Arts degree in Sociology from the American University in Cairo, and a Bachelor of Arts degree in Economics from Swarthmore College in Pennsylvania.  She is a lecturer at various universities and business schools across Switzerland. Doaa is passionate about mountain sports, and is an avid trekker and mountain climber.

Find out more about the Rockefeller Foundation Economic Council on Planetary Health at the Oxford Martin School. For enquiries about the Council, please email Doaa Abdel-Motaal.