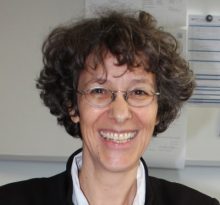 Prof. Dr. Claudia R. Binder studied natural sciences at ETHZ and holds a PhD in environmental sciences and a venia legendi in Human- Environment Systems, both from, ETHZ, Switzerland. From 2006-2009 she was assistant professor for Social and Industrial Ecology at the University of Zurich, Switzerland; from 2009-2011 full professor for Systems Sciences at the University of Graz, Austria; from 2011-2016 she was full professor for Human Environment Relations at the Department of Geography at the University of Munich. Since March 2016 she is holding the Swiss Mobiliar Chair for Urban Ecology at ENAC, EPFL and is the head of the laboratory for Human-Environment Relations in Urban Systems (HERUS). She is a founding Member of the “European Group for the Study of Socio-Ecological and Socio-Technical Systems” and a member of the working group “Spatial politics and planning for the energy transition” in Germany. From 2013-2016 she was spokeswomen of the interdisciplinary research consortium ForChange dealing with resilience and transitions in current social and social-ecological systems. Since 2016 she is member of the research council of  the Swiss National Science Foundation / Division IV. Her research interests lie in analyzing, modeling and assessing transitions towards sustainability. For doing so she develops inter-and transdisciplinary methods which are able to depict the key aspects of the ecological and the social systems and moreover the relations, feedbacks, and regulatory mechanisms between them. Her application areas are in energy, phosphorous, water, food, and land-use in the context of urban, peri-urban and rural development in Europe and Latin America. She has published over 50 peer-reviewed publications in renowed journals such as Ecology and Society, Ecological Economics, Environment Science and Technology and Industrial Ecology. With her team she has organized and co-organized more than 18 conferences and guided over 20 stakeholder work-shops ranging from scenario development, eliciting and consolidating system knowledge, and result dissemination.