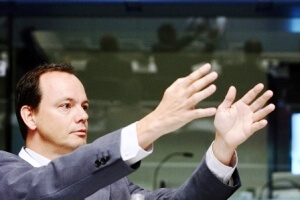 St. Gallen, May 2011. The World Resources Forum has a new Managing Director. Bas de Leeuw (Dutch economist and former United Nations diplomat) has taken up his post this month. He brings a wealth of knowledge and experience to the Empa team, having been in charge of multiple UN programs in the field of sustainable development. De Leeuw also held various positions in the Dutch government, OECD and was most recently Executive Director of Dana Meadows’ Sustainability Institute in the USA.

“Conferences alone do not change the world”, De Leeuw says, “but without them we wouldn’t have seen any progress at all. Conferences can be milestone events, inspiring governments to commit publicly to appropriate strategies. They can showcase business progress and they are a podium for scientists and NGO’s to discuss problems and opportunities. For the media they are the perfect avenue for informing the public and hence keep the sense of urgency for the cause in society. And last but not least, it is only at conferences – during coffee breaks, at lunch, dinner and in the famous corridors – that people from various backgrounds can bond and in an informal way discover ways of cooperating.”

The new Managing Director is pleased to land in “an already perfect setting”. He mentions the high-quality Empa-team, led by WRF President Xaver Edelmann, which has organised international conferences on recycling and reuse since 1993. These famous R’series were in 2009 upscaled to become the World Resources Forum at the occasion of a spectacular Twin Conference (organised jointly in Switzerland and Japan). “Backbone of the team are the two Martins” (Martin Birtel and Martin Lehmann), he says, “and with them and their colleagues I have the pleasure to benefit from a small, dedicated and no nonsense team of young professionals, who each combine cutting edge knowledge of the issues, mastered at the Empa think-tank, with a curious and open attitude towards the world’s future”. Empa, he points out, is part of the ETH-Domain – often referred to as the European MIT – where nobody less than Albert Einstein once studied and lectured. De Leeuw is also very pleased with the strong support of a multitude of external partners, from all parts of the world, who advise on themes and speakers, through the Expert Committee and Scientific Committee.

De Leeuw’s arrival is, according to Xaver Edelmann, also an important step towards the realisation of the WRF Association: an independent organisation which will organise the conferences (which will become annual in stead of bi-annual, and take place in various parts of the world), and work to increase its global reach and effectiveness. “Many of our partners have requested for such a structural setting, and I am pleased to report that the implementation of this idea is now making very good progress”, says Edelmann. China, Australia and Germany have already expressed informal interest in hosting future WRF events in their region. The Association will, apart from its founding members, be open for governments and other non-profit organizations, companies  and individuals.

The organisation of WRF2011, to be held in September this year, is in full swing, with confirmed speakers including UNEP’s Executive Director Achim Steiner, EC’s Commissioner Janez Potocnik, Ashok Khosla and Ernst Ulrich von Weizsaecker (International Resource Panel). A delegation of global parliamentarians will be present as well. “We will make this year extra efforts to make the conference in particular  ‘cool’ for young people, students, young professionals, an initiative which was already started two years ago with the ‘student reporters’. The use of the social media, like Twitter and Facebook, will be strengthened”, adds De Leeuw. Bas de Leeuw’s personal website has an overview of his professional career, including an article about WRF 2009.

He and his team members can be reached here.