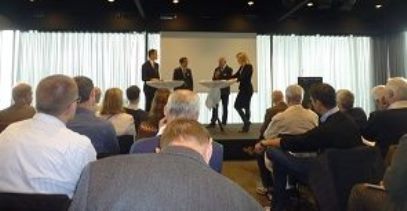 Bern, 5 October 2016 “Does Switzerland need a national resources agency?” This was one of the main questions discussed at the second Gurten Symposium, organised by the Swiss Association of Geologists near Bern.

Switzerland is a country “rich in poor mines” as stated by Matthieu Carrel, chef of the legal group of the regional development section of the Vaud canton. Extracted from its ground are mainly sand, gravel and hard rocks for the cement and building industry, at the level of 53 Mio. tons per year. Almost all other abiotic resources are imported.

Even if sand, gravel and hard-rocks are abundant in Swiss soil, their extraction is far from straightforward. The consumption of these resources is steadily increasing and their availability is taken for granted, to the point that this generates tensions. Many potential extraction sites lie in regions of particular beauty and environmental value. To which point can the extraction continue? At which price? This conflict explains the titles of this year’s conference: “Natural resources: a curse or a blessing?”

Many questions emerged during the conference:  are mineral resources limited at all? How can Switzerland handle the tension between conservation and resource exploitation? Which are the legal bases? Which role should the national government play? The regulatory role lies at the moment with cantons and municipalities. Which are the long term consequences of the growing consumption of these non-renewable resources? And are recycled materials an alternative to the extraction of primary materials?

A lively podium discussion followed the various presentations and one of the conclusions was that Switzerland may need an agency which brings all the different actors together around a table, in order to find a common solution. NEROS, the Swiss Network of Mineral Resources, would be well positioned to take this role. More information on the outcomes of the conference, organised by the Swiss Association of Geologists (CHGEOL), together with the Swiss Geological Survey of swisstopo, the Swiss Academy of Sciences (SCNAT) and NEROS, is to be found here (in German and French only).

NEROS is one of the partners of the WRF that is currently organising another national event, namely the first Swiss Resources Forum, which will take place on December 1. in Dübendorf near Zürich. The focus of this year’s conference is “From the energy- to resource revolution”. Organised in plenary presentations and world cafés, the conference will give the opportunity to participants to discuss how a resource revolution – similarly to an energy revolution – could take place in Switzerland and how the energy revolution depends on the availability of critical materials. More information on the conference is to be found here.