Back To Home
General Announcements February 14, 2015

“Sustainability is about behavior. We need social science to make real progress” 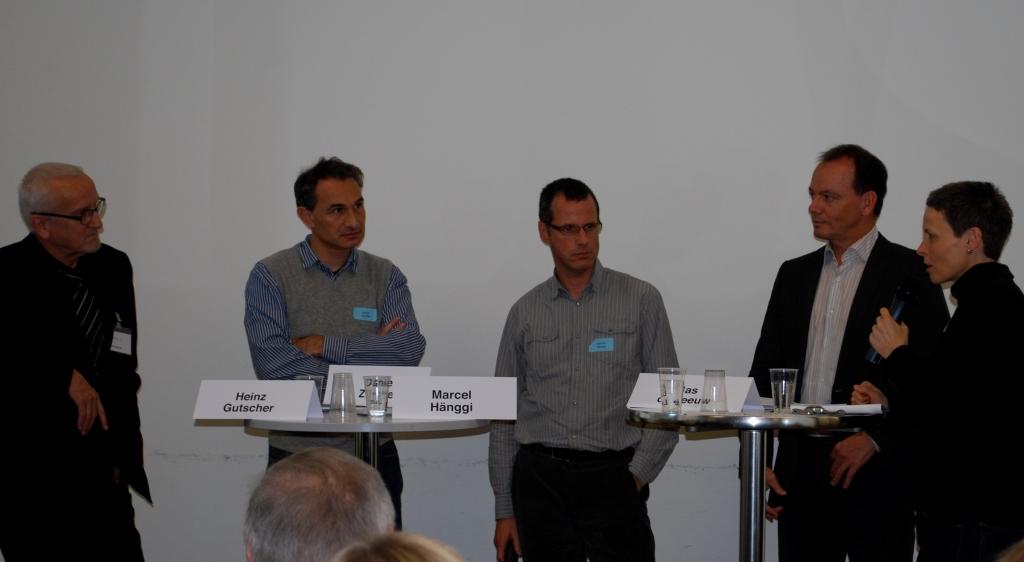 Bern, 7 November 2012   “Sustainability is about behavior, things that people feel, think and do. We cannot solve this issue with natural and technical science alone. We can go on publishing our analyses and organizing our UN conferences for another forty years, but we need social science to make real progress.” This was said by WRF Managing Director Bas de Leeuw in a podium discussion at the end of a colloquium on sustainable resource use and lifestyles, organised by the Swiss Academies of Arts and Sciences in Bern, November 7, 2012. Heinz Gutscher, President of the  Swiss Academies of Arts and Sciences, had in his opening remarks observed that “happy” still means “materials and shopping” for many consumers. Decoupling strategies, involving efficiency as well as sufficiency concepts, was needed. He hoped that engineering and design would play an increasing role in making sustainable products and services more attractive, and he noted that more and more discussions in society are about “less”.  He also referred to the “wild sides of society” such as the minimalists.

Some 120 social science experts working at universities, research institutes, governments and NGO’s in Switzerland participated in this colloquium on “Sustainable Resource Use and  Lifestyles”. The one-day workshop provided a status report on who in Switzerland is working on this issue, and inspired a discussion on strengthening the role of human and social scientists in the debate on sustainable resource management, which so far in particular has been studied by natural and technical scientists.

Franziska Schmid and Michael Stauffacher (both ETH Zürich) presented a draft report, commissioned by the Swiss Academy of Humanities and Social Sciences (SAGW),  identifying 155 social scientists working in Switzerland on resource use management, most of them economists, human geographers and  political scientists. They recommended that social scientists should become more active in the debate on sustainable resource management, by means of joint networks and research projects.

According to Jörg Rössel, University of Zürich, a more systemic analysis of the sustainable footprints of various lifestyle groups would be important, as well as finding out how to communicate with specific target groups. Political scientists should study the acceptance of price and legal instruments by the public. Some think that social scientists can make technical solutions more acceptable to the public”, Jacques Lévy (EPFL, Federal Technology Institute Lausanne) said, “but the potential contribution is much more, like providing society models which can yield insights in fundamental underlying questions such as what concepts of nature our society has, what the urgency and time horizon is.” He observed an asymmetrical political field, where sustainable development actors can be opposed by radical thinkers who see sustainable development as putting together incompatible pillars. In Switzerland sustainable development is often reduced to its natural environment component.  And he referred to the failure of the Copenhagen Climate Change Summit of some years ago by saying that “perhaps we want to go too quickly for problems which are too complex to solve. “

Paul Burger (University of Basel) asked attention for a lack of understanding of governance and cultural systems and how they interact with ecological systems. He presented two different ways of how societies manage resource management: avoiding the tragedy of the commons (management of scarce resources, protection of ecosystems), and sustainable development, which aims at achieving global justice, with resources as limiting factors.

Bas de Leeuw (WRF) referred to the outcomes of WRF 2011, where more attention to social science was recommended, and to a corresponding article in Gaia, in which plans were revealed to start working on this issue, beginning in Switzerland. He spoke about a workshop which was held at WRF 2012, Beijing, just a few weeks ago, which had the title “When will they start listening to us”.  This workshop was one of the most visited and had to be extended with some extra hours of discussions.

He believed that the sense of urgency seems to be missing not only with politicians but also with scientists. He challenged scientists to not always wait for 100% certainty and consensus in promoting their findings. “Suppose you have found out that next week a meteorite will strike Switzerland, and you calculated it will come down in the centre of Zurich … would you then also wait for peer review? Start a new research? Or would you very seriously alert the authorities and your family and friends, even knowing that you might be wrong and that you also will not get any academic credits for that work?” Markus Zürcher, General Secretary of SAGW, announced in his closing remarks that organising a bigger scale event at next year’s WRF, to be held in Davos, October 6-9, 2013, was one of the priorities of his organization.

Program, draft SAGW report and presentations can be found on the SAGW conference website (German/French only). Pictures used in this article: SAGW.

For more information about the work of the WRF on social sciences and sustainable resource management write to info@worldresourcesforum.org