Back To Home
General Announcements February 3, 2017 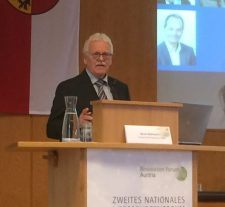 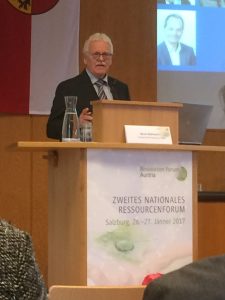 Salzburg, 19 January 2017 The Second National Resources Forum (RFA) in Salzburg, Austria emphasized the role that municipalities and cities play for a path towards more resource efficiency and circular economy. As Helmut Mödlhammer, President of the Austrian Association of Municipalities put it, municipalities have the advantage to be closer to the people’s needs. They should therefore act as the pioneers when it comes to the implementation of resource efficiency. Representatives from organizations such as the Alliance in the Alps confirmed the role and potential that  resource efficient cities have in this regard.

Adding the global perspective, WRF president Xaver Edelmann pointed out the world-wide implication of urbanization on the increased resource use of cities. We should therefore concentrate on decoupling the growth of cities from resource use, he explained. The role of eco cities will also be one key issues discussed at the upcoming World Resources Forum 2017 in Geneva, from 24-25 October, 2017.

Education and research as a key factor towards a circular economy

Multiple panel discussions participants present at the National Resources Forum Austria pointed out the importance of education and research for a more circular economy. The resources problem should therefore be included in curricula for schools and universities. Resource efficiency is not only an environmental issue, but also takes into account social and global implications, stated Professor Franz Josef Radermacher from the University of Ulm. Furthermore, Professor Daniel Beat Müller from NTNU explained that his role as a researcher focuses on generating system knowledge with which new problems can be identified.

The Ressources Forum Austria (RFA) was established 2013 as an Austrian platform for efficient use of resources, material efficiency and sustainability. The association of the National Resources Forum pursues the goal of achieving closer interconnection of science, business and politics as well as raising awareness for resource issues and sustainability. The RFA thereby makes a decisive contribution to the specification and implementation of solutions for urgent issues concerning resource and material efficiency according to the European Commission’s flagship initiative.