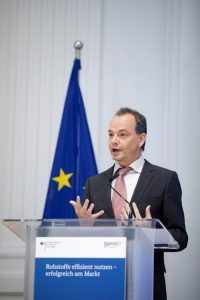 Berlin, 16 February 2017 In his speech at the occasion of the German Raw Materials Efficiency Award Ceremony Bas de Leeuw, WRF Managing Director, reflected on the answers that policymakers, business leaders and researchers may formulate in response to populist movements. “The populists are coming, all around the world”, he said. “We may witness a trend that some politicians think they do not need facts. They think differently about solidarity among people and generations and they think differently about international cooperation. Understanding populists and their voters is not as difficult as it seems. We only need to go deep into our own mind, peeling off layers of civilisation and education until we reach our basic needs, our basic fears: we want to breath, eat, drink, and survive. If this seems to be in danger then the response may be: don’t do anything for somebody else and for something far away, do it for me, and do it right here and now.”

Experts should not feel disheartened and turn away, De Leeuw went on, rather keep sharing their knowledge and facts. But it may be wise to connect more with individual and direct benefits of sustainable lifestyles, such as health, security and quality. Governments should more than ever set an example and be consistent. Practicing what they preach, with strong legal and financial instruments, so that environmental policies can become credible and inspiring, also to a public which may be increasingly critical or even hostile.

“As far as I am concerned environment-friendly lifestyles may be practised out of pure selfinterest to become a more healthy, rich, popular and happy person”. It is in fact amazing, De Leeuw said, that we still have not succeeded in having environmental damage incorporated in product prices. 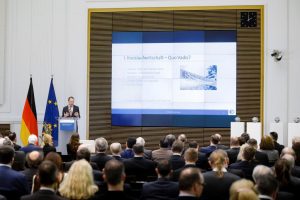 He praised circular economy as a concept that can turn waste into resources and added that efficient material and energy use is important.  He welcomed the important place that the concept has in the G7 Alliance for Resources Efficiency, with Germany, Japan and Italy among the leading members.

De Leeuw also pointed out that Circular Economy has been a focal area of the work of the World Resources Forum. Not only in its conferences, but also in multistakeholder dialogue projects, such as the Sustainable Recycling Industries project, which will lead to Guiding Principles for secundary raw materials under the umbrella of an ISO IWA (International Workshop Agreement). He called for new partners since “standards are one thing, but one needs practical experiences for a succesful implementation”.

The World Circular Economy Forum will be held in Helsinki, June 5-6,  organised by WRF partner SITRA, the Finnish Innovation Fund and various other partners, including the Nordic Council of Ministers and UN Environment.

This year’s World Resources Forum 2017  will be held in Geneva, October 24-25, devoted to the Resource Revolution, in particular aiming at business.

De Leeuw: “The Energy Revolution cannot be stopped anymore, this is no longer depending on only governments and international agreements. Industry has taken it on, and now the power of innovation will keep it going”. But a Resource Revolution is much more complicated. The situation is comparable to the oil crises in the 70ies of the last decennium. We had alternatives for oil, for critical metals this is not yet the case. We have received many “wake up calls” in our conferences over the last few years.

He also mentioned the FORAM project, which the WRF leads in order to advise EC DG Growth about the development of a World Forum on Raw Materials, which should improve international cooperation and exchange of knowledge in these areas.

Uwe Beckmeyer, Parliamentary State Secretary at the Federal Ministry for Economic Affairs and Energy, with the winners of the German Raw Material Efficiency Award 2016 © BGR/photothek 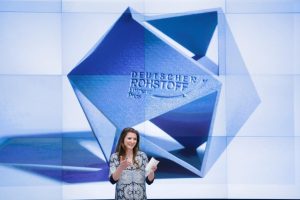 Uwe Beckmeyer, Parliamentary State Secretary at the Federal Ministry for Economic Affairs and Energy, commented by saying that efficient use of natural resources is a key competence for a future-oriented society. “The winning projects show that Germany can decrease its dependency on raw materials imports.”