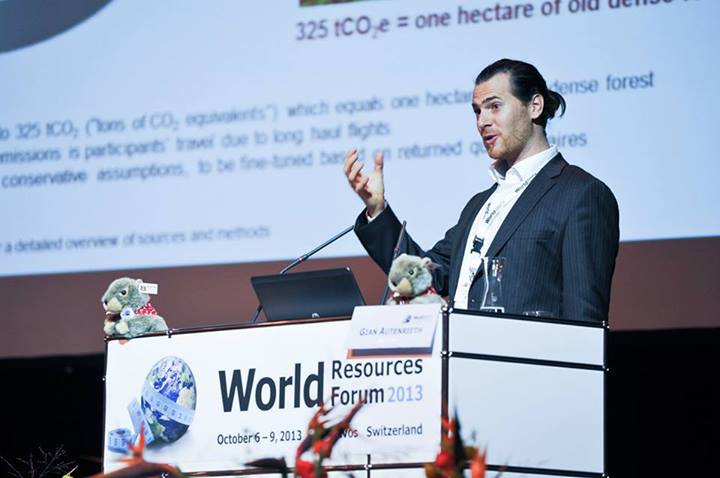 Zurich, 17 January 2014  As a first tangible result of a new partnership with the World Resources Forum South Pole Carbon will offset CO2 emissions caused by travel and stay of all – over 400 – participants of the last conference, held in Davos, October 2013. The Zurich based carbon offsetting company will support a forest and biodiversity project in Zimbabwe. Project manager Gian Autenrieth announced this in Davos. Participants of the WRF could vote for three initiatives and chose the Kariba project, which aims at providing sustainable livelihood opportunities for poor communities in Northern Zimbabwe, a region suffering from deforestation, poverty, and drought.

The collapse of Zimbabwe’s agricultural production, as well as population growth, has led to significant forest degradation. This has impacted strongly on native ecosystems, which could no longer be managed sustainably. About 3 % of Northern Zimbabwe’s forest cover has been lost per year, wildlife populations have partially collapsed, and Zimbabwe now has one of the world’s lowest Human Development Index scores.

This is where the Kariba project comes in. Its aim is to reduce deforestation and forest degradation through a range of activities proposed by local communities and financed by project supporters.

These include the establishment of nutritional gardens, conservation agriculture, honey production, forest fire prevention and enhanced wildlife conservation. There is also direct support in the provision of basic equipment needed for the administra

The idea for this project came directly from the local community, which has rooted the project strongly in the region. The project is supporting the local population in their transition to sustainable soil and forest management. Thanks to funding beyond the actual crediting period, a long term project activity is secured.tion and management of the project, such as computers, printers, bridge repairs and uniforms for community guards. In addition, locals are supported in setting up their own sustainable businesses that allow a living in line with conservational requirements. This includes low-emissions brick making, and native fruit tree cultivation, and the establishment of beekeeping, with honey sales greatly contributing to family incomes. • Several healthcare centres have been supplied with basic medical supply; refurbishments are being planned.

• More than 10 schools will get repaired, and are provided with roofing and furniture.

• School fee subsidies will be available through the project for the poorest quarter of the local population.

• A bridge has been repaired, and several hundred kilometers of bush roads are being repaired every year, along with early burning to embank bush fires.

• Boreholes are being refurbished, which will benefit a large number of families.

• Community nutrition gardens are being established, with already 11 in operation and another 50 in planning. Per garden, about 40 families can secure their vegetables supply.

• Direct employment opportunities have been generated for about 60 local people for project operations such as community scouts, staff for fire prevention measures, nutritional garden establishment and water pump maintenance.

• Assistance is given for the establishment of family-based microbusinesses such as honey production.

• Conservation farming and other non-destructive farming approaches are taught in the project’s agricultural classes. This also leads to enhanced climate change awareness and adaptation capabilities of the community.

•The project will help preserve biodiversity corridors between four national reserve parks, which are crucial for endangered or vulnerable species such as the elephant, lion, zebra, buffalo, African wild dog and impala, confirmed by CCBS validation at “gold” level for outstanding biodiversity benefits.

• Game scouts will help to reduce wildlife poaching; this will also reduce the occurrence of wildfires, which are often caused by poaching activities.

• Through the introduction of conservation agriculture such as anti-erosion terracing techniques and low tillage farming, soil degradation is avoided.

• Use of organic fertiliser (manure, poultry litter, dead organic matter) is given priority over chemical fertiliser.

• Crop rotation delivers a stable and diverse food supply, and preserves nutrients in the soil.

• Forest fires can be avoided and tamed through education and training on fire prevention and firefighting.

For more info about the South Pole Carbon and their projects please visit: www.southpolecarbon.com