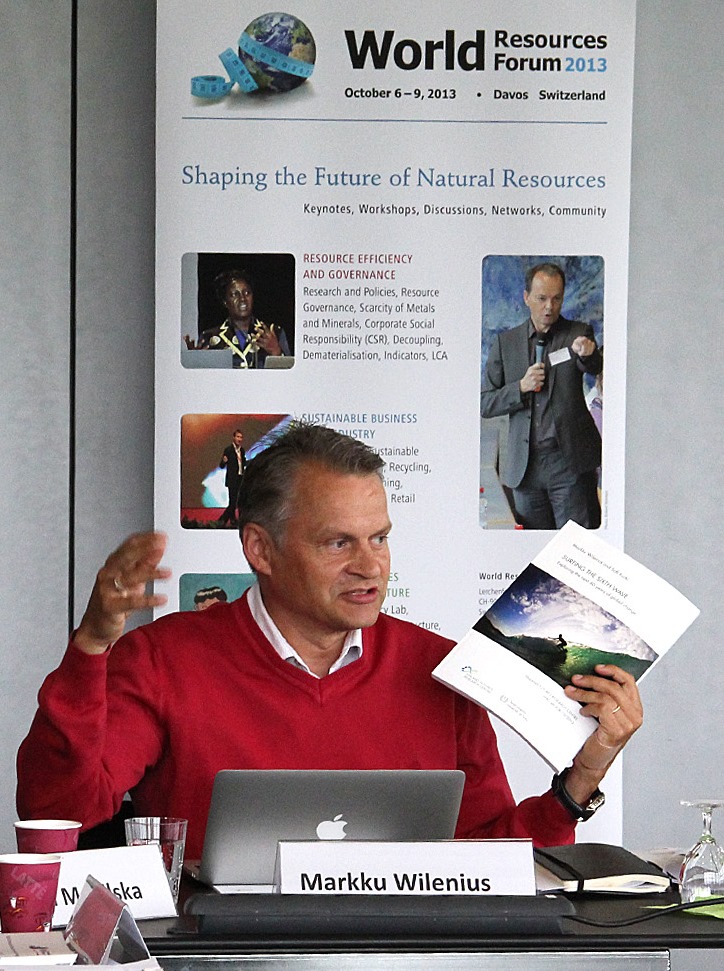 St. Gallen, 22 May 2013 The agenda of WRF 2013 is nicely shaping up as a result of last week’s meeting of its Steering and Scientific Expert Committees. Over 20 experts gathered at WRF’s headquarters in the Swiss town of St. Gallen to discuss the program and the current status of preparations.

The experts addressed lessons learnt from earlier conferences, in particular WRF 2012, and commented on plans for this year’s plenary and side events.

Bas de Leeuw gave an overview of the plenaries, which will this year include panels on resource governance, moderated by two members of the European Parliament (Gerben-Jan Gerbrandy and Reinhard Bütikhofer), as well as on sustainable business innovation, and on lifestyles and education.

In a letter to the WRF the European Parliament members had expressed their support for “making global resource governance one of the central themes” of the 2013 World Resources Forum.

“We are convinced that the world needs stronger international governance for resources. The current situation of increasing competition over resources is inadequately addressed internationally. Creating an international platform where experiences can be shared, national strategies can be combined and stocks can be managed jointly, would help contain a worsening scramble for resources”. In this process, they write, “the commitment of the World Resources Forum is crucial. The WRF plays a key role as an international facilitator and science-based platform”. Among the speakers who confirmed to participate in this session is HRH Prince Jaime de Bourbon de Parme of the Netherlands.

UNEP representative Tomas Marques announced that UNEP DTIE Director Sylvie Lemmet plans to speak on the opening day, and that several International Resource Panel members were planning to speak at a special session on metals, and possibly on cities. Core of the meeting was a briefing on the review process for the scientific oral and poster sessions. Conference manager Martin Lehmann informed the Committee that to date over 120 abstracts had been received, which is considerably more than for previous conferences at this time of the year. Scientific chair Christian Ludwig explained the topic clusters and the procedure for reviewing the abstracts, using a new conference tool. Find here the Call for Papers.

Veronika Rekasi presented the latest status of the workshops and side events. Over 30 organisations have indicated an interest to organise their workshop or side event during the WRF, which is a record high as well.  Among the organisations with approved project proposals are the Club of Rome, the German Federal Environment Agency (UBA), SERI, Technopolis, Wuppertal Institute, Koli Forum, Empa, Zero Waste Alliance, SAGW (Swiss Academy of Humanities and Social Sciences), UNEP, State Islamic University Jakarta, the Council for Less Common Elements, Paul Scherrer Institute, and TNO (Netherlands Organisation for Applied Scientific Research). In a longer term outlook session Marcela Mogilska presented plans for WRF 2014, which will be held in Latin America. Various themes and partners were discussed. The WRF Secretariat is actively working with several candidate hosts and hopes to publicly announce the venue of WRF 2014 in the closing session of WRF 2013.

The meeting was chaired by WRF President Xaver Edelmann, who announced his retirement from Empa in August this year.

For information and suggestions for WRF 2013 please write to info@worldresourcesforum.org

Photos: Iris Halbeisen (Empa). More pictures of the event can be found on the photo gallery on our Facebook page.