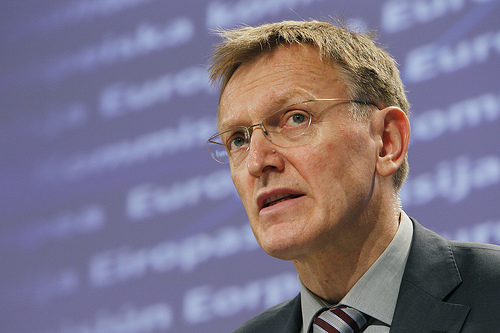 Dr. Janez Potočnik is one of the keynote speakers at the World Resources Forum 2011 in Davos. With his keynote address on “Resource challenges for Europe in an open and changing world” he will be part of the opening session on September 19, together with speakers such as Achim Steiner, Doris Leuthard and Ernst Ulrich von Weizsäcker. Dr. Potočnik has been a member of the European Commission since May 2004. From 2004 to 2009 he was responsible for the Research and Science department and in February 2010 he became European Commissioner for the Environment. Dr. Potočnik defined three priorities for his mandate; resource efficiency, biodiversity, and the implementation and enforcement of European environmental legislation. Two out of these three priorities were addressed at the European Green Week. In 2010, which was the international year of biodiversity, the Green Week covered the topic “Biodiversity – our lifeline” and this year “Resource Efficiency – Using less, living better” was discussed.

As a member of the European Commission Dr. Potočnik was involved in the proposal for Europe 2020, the EU’s strategy for a smart, sustainable and inclusive growth. One of Europe 2020’s seven flagship initiatives is to achieve resource efficiency in Europe, a topic that is also addressed at the World Resources Forum.

“We should stop talking and start acting. We have only one earth to protect and we are all responsible to do it.”