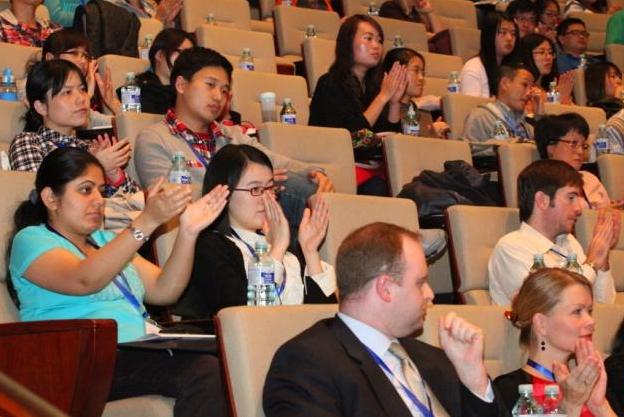 St. Gallen, 6 December 2012  An overwhelming majority of participants of WRF 2012, which took place in Beijing, October 21-23, 2012, is (very) satisfied with the event. This can be concluded from the results of the participants survey which was released today. A very encouraging 94% of all respondents were either “very satisfied” or “somewhat satisfied” with the WRF 2012 event as a whole. Find below an overview of the main questions and answers. All answers will further be analysed by the team and involved in the preparations of our next events.

The venue of WRF 2012, the China National Convention Centre, was rated by again 94% as “excellent” or “above average”. There were a couple of critical voices who found that the venue did not communicate the message of a sustainable use of resources.

In another question, the WRF team wanted to know how the participants perceived the logistical organisation of the event like registration, hotel reservation etc. Again, a high percentage of participants concluded that the organisation was “excellent” or “above average”. People thought the conference staff was very friendly and helpful. A number of vegetarians wished for some more meat-free dishes.

Around 90% of the responses considered the substantive organisation (agenda, choice of speakers, workshops etc.) as “excellent” or “above average”. The open comments on that question will be considered by the organising committee to further improve the WRF events in the future.

The next question aimed at the choice of topics and how appropriate they were for the conference. 60% of the responding participants found the chosen topics to be “very appropriate”, and 38% as “somewhat appropriate”. This means for the organisers to keep on sticking to most of the hot topics, but at the same time to modify the focus where needed. This was already achieved during WRF 2012, where as a result of the 2011 survey for instance the A+ workshop was dealing with the social aspects of the resource discussion, asking the decisive question “When will they start listening to us?”

With regard to the quality of the plenary speakers, the feedback is also very favourable, as 95% liked their presentations. A couple of attendees pointed out that the plenary speeches were very different; however, this can also be seen in a positive light.

The quality of the workshops and parallel session was also judged as “excellent” or “above average”. The feedback though is a bit more diverse. It was for instance mentioned that there were too many parallel workshops and sessions at the same time. This is a challenge for the organising committee. Providing the opportunity to discuss specific topics and research questions in the workshops/sessions means at the same time that the amount of parallel events increases. Reducing the amount of parallel sessions and workshops would mean to extend the WRF conference to more than 3 days. So the choice has to be balanced, which for the organisers means between 5-8 simultaneous sessions/workshops, not more and not less. The following question supports this concept.

Question number 8 was referring to the general setup of the WRF conference, and whether the participants would prefer to see more plenary sessions, or more workshops, or keep it as it is. As expected, this is very much a matter of taste, but the majority (47%) of the answers indicate to keep the setup as it is.

The next question was tackling the issue of what stakeholder group the WRF participants would like to see more often in future events. As a respondent to this question, one can either be interested to see “more people of my group” or say “I would like to meet more people from other sectors, professions, organisations, parties etc.”. In that sense, this question is a bit difficult to interpret, but basically the WRF participants appreciate to meet experts with a diverse background. This feedback supports WRF in its strategy to be the global science-based platform for sharing knowledge about the economic, political, social and environmental implications of global resource use, by building bridges among researchers, policymakers, business, SMEs, NGOs and the public.

It is always a pleasure to read through all the personal highlights that WRF participants experience during the conference. For some, it is the venue, or the delicious dinner, for others it is a more content-related highlight like a workshop or a plenary speech, for a third group it might be a conference topic, or finally a new insight like “do not sell goods, sell services instead”. Many participants were delighted to see so many young people attending. The answers to this open question are not reported here, since it would fill many pages, but these will certainly play a big role in our considerations for WRF 2013.

The last question was about the international student reporters who were present at the conference, contributing with reports and interviews. Participants were asked whether they would like their presence also in future events, and if yes, how big the group of student reporters should be. As it can be seen from the chart, 83% of the attendees would like to see as many student reporters as in Beijing, and with the same or similar functions.

All in all, the participant survey showed that the WRF conferences are in demand and that the setup reflects the needs of the participants. We are always happy for your feedback at any point of time, please check our WRF website or send our conference manager, Martin Lehmann, an email at info@worldresourcesforum.org