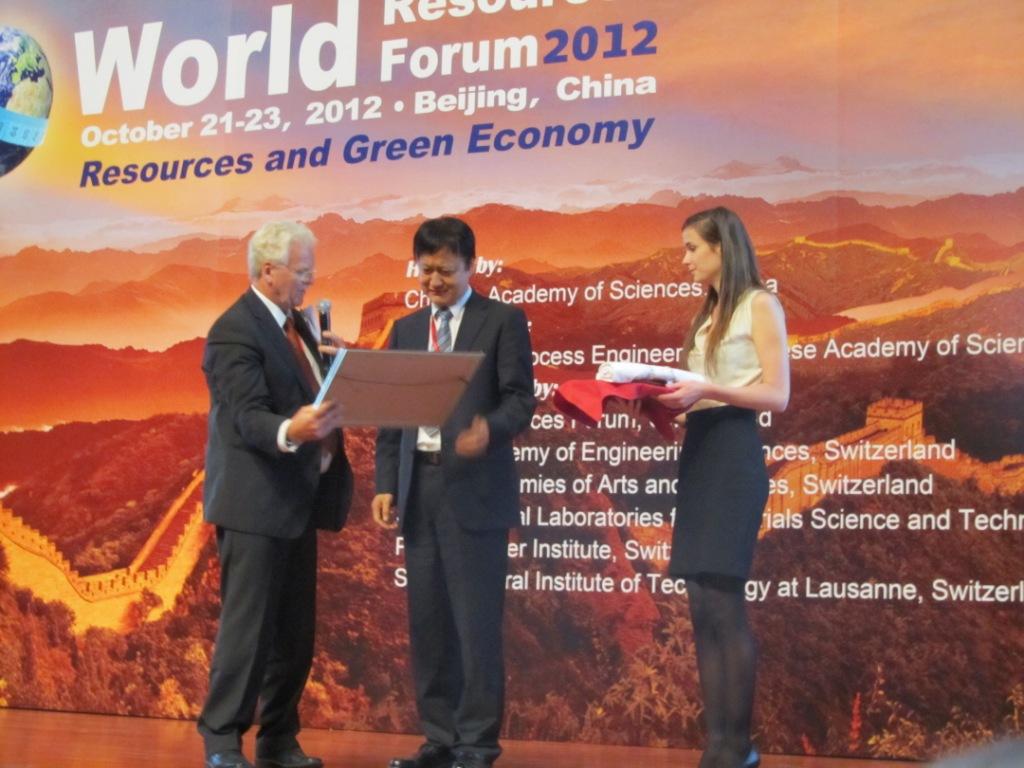 Beijing, 23 October 2012. Governments need to be alert to the growing spider web of bilateral resource agreements, in particular those involving developing and emerging countries. Better international resource governance is beneficial for all, since it leads to more stability and lower prices. Establishing a neutral international platform for resources comparable to the existing International Energy Agency (IEA) should be considered. Unlike the IEA which was built up by OECD countries, this platform should from the start involve developing and emerging countries, such as China.

This recommendation is part of the draft chairman’s summary of the World Resources Forum, which concluded today. The annual conference, organised by the Swiss-based WRF Secretariat, this year hosted by the Chinese Academy of Sciences (CAS), with support from a range of governments, businesses and leading resource scientists worldwide, attracted over 700 participants coming from more than 50 countries.

The Chinese approach of a harmonisation of economy and ecology, and similar international initiatives by other countries, need to be implemented and followed by all. Phasing out or drastically diminishing dependencies on fossil fuels, in particular the global economy’s addiction to oil and coal, was considered to be technically and economically feasible for the next decades, with each country choosing its own path. Policies for sustainable resource management and changing consumption and production patterns need to be based upon solid research, not only engineering but also behavioral oriented scientific findings. Cities were seen as very important actors of change for decoupling strategies, as well as for preserving biodiversity and increasing the quality of life for its citizens at the same time.

After three days of discussions in plenary and workshop sessions the draft summary of the two conference co-chairs, Jinghai Li, Vice-President of  CAS and Xaver Edelmann, President of the WRF, was presented by WRF’s Managing Director Bas de Leeuw.

The full draft chairman’s summary, as presented to the participants on the closing day can be downloaded here. The chairs will finalise the draft in the coming weeks, based upon comments to be received from participants.

The conference, organised in the prestigious China National Convention Centre, was opened by China’s Vice-Minister for Environmental Protection, H.E. Li Ganjie, who stated that environmental protection is a very important basic national strategy for China. He announced that new policies to promote circular economy will be announced shortly, including stringent monitoring and evaluation systems.

WRF 2012 included keynotes from influential scientists such as Amory B. Lovins (Rocky Mountains Institute) and Tom Graedel (Yale University), Europarliamentarian Gerben-Jan Gerbrandy, and business leaders, such as Joachim Klink (Hewlett-Packard). Several workshops were organised, including by the United Nations Environment Programme (UNEP), the Swiss Academy of Arts and Sciences, the German Federal Environmental Agency, the UNEP/Wuppertal Institute CSCP Centre, and others. Oral sessions (250 abstracts presented in 11 scientific themes), some 80 poster presentations, and a children’s drawing exhibition of Swiss and Chinese schools were part of the program as well. Find here more information about the conference (program, speakers, presentations, some of these to be published in the following weeks). Connect to WRF Facebook for stories behind the scenes, and for browsing through photos of the conference as well as “around the meeting” pictures.

Other activities of the World Resources Forum secretariat, including upcoming meetings, can be found on the homepage. The next WRF will be held in Davos, 6-9 October 2013.